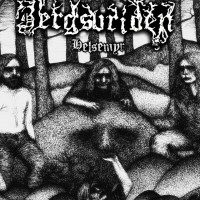 It’s been two years since Sweden’s Bergsvriden released their debut album ‘I Vitterhetens Becksvarta Gömmen’ and I’ve been hooked ever since. Pretty impressive given it was only seven songs, one being a cover. Couple that with being only a three piece you and can double your admiration. This isn’t your typical folk metal experience ,
Bergsvriden hearken back to a time when folk metal wasn’t even a thing. Like it’s predecessor Helsemyr finds it’s sound rooted in the primordial ooze from which folk metal sprang. This is probably the blackest Folk Metal out there. In fact Bergsvriden bridge the gap between Black and Folk Metal so well, there can’t really be a distinction between the two. Black Folk is the easiest way to label what they do. If a lot of bands itn the this genre sound like they are a celebration of life, nature, and heritage, Bergsvriden take the other route. Their music sounds more like a celebration of rot, murk and the creation of hellish abominations. Taking a less is more approach their songs Bergsvriden tend to have a slow to mid paced swagger with lots of acoustic passages and dirgey interludes. You don’t actually get a lot of the traditional folk metal instruments in every segment, most songs are driven with a simple riffs ,basslines, and raspy black metal vocals. Sometimes opting for a somber kind of chant but mainly clean vocals aren’t a fixture here just good old raspy screams and growls. But don’t the slow grimey dirges fool you they’re just lulling you before they go for throat with a double bass driven cacophonous assault. The slower paced funeral march may be their bread and butter but I am a big fan of the faster songs like “Skri” and “Bundsbesatt” show they’re equally capable of faster songs that the truest of your kvlt friends can appreciate. Think Satyricon’s “Dark Medieval Times” meets early Trollfest.
I’d say the biggest difference on Helsemyr compared to their last album is that the more traditional folk instruments are used quite a bit less. And you absolutely won’t hear the same approach in every song. Aside from acoustic guitars which are one of the only mainstay as far as traditional instruments, you’ll occasionally hear some accordion or piano/organs, but only here and there and make for perfect accents. This makes each song have its own kind of feel and the tactical use of those instruments feel less gimmicky. Rather than just feeling like black metal songs with forced keyboard parts they do a great job of making everything more organic. The perhaps best difference though is the length. As I mentioned before the last album was pretty short, this time around we get twelve songs running around 45 minutes. Ranging anywhere from a little over a minute to seven minutes, Helsemyr is a much fuller feeling release. Being a fan of the faster songs I’d love to hear more of those , but there is lot of charm in the slower instrumental songs. I’ve been anxious to hear more Bergsvriden, and Helsemyr’s dark and broody moods delivered everything I’d hoped for.