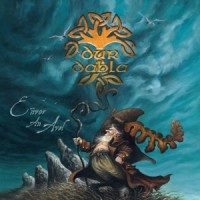 What is it with French bands? Recently Eklyps in 20 years released an EP after only one full album. Fellow countrymen Dur Dabla have been around not quite that long, but if you release your debut full album after 10 years, you can’t expect to be called the Devin Townsend of French folk metal. One other thing before we turn our attention to the music: what was the band thinking when they said yes to the album cover? You have got 10 years to think of a cover that will show your view on music, on life, on the world. And you come up with Douwe Dabbert and a few sea gulls? I really and truly do not understand.
So let’s face the music. Comparisons? How about Dutch ensemble Myrkvar for the male growls? Style wise, a bit of Rabenwolf. Definitely metal, albeit on the accessible side. Folk elements: full time accordion player and flutist on board. Not a party band. Not too heavy handed either. Not extremely original. By now, you may have noticed a lot of ‘nots’ in this review. That’s because, although the music is not bad, it doesn’t grab me in any way. Do you recognize this: a band that does everything right, and yet you have a hard time really liking it? That sort of describes this band and album for me. As stated: the folk elements are there, it’s metal, speed is varied from blast beats to mid tempo, distorted guitars and acoustic parts, all there. And still, I am not convinced. I like it, but only because I like folk metal. It’s okay, and that’s that.
And like Eklyps, it makes one wonder if there is room to grow. If this is what you release upon the world after 10 years of practicing, thinking, writing and rewriting, I for one am not very hopeful.