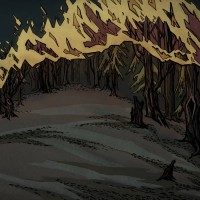 This Russian duo has been around since 2004. Releasing only their second full album, are they being careful or are they being lazy? I say, they have been lazy. How do I come by such a harsh verdict? Couple of reasons. One, the album doesn’t even last 35 minutes. I have heard EP’s lasting longer than that. Second, 5 out of 9 songs are only there to guide you through the album. Okay, intro and epilogue, we can handle, but three spoken words interludes definitely take the rhythm out of the album. Third, of the remaining 4 songs several end in a fade away style. I say: too lazy to think of an decent ending.
The spoken words are all in Russian, or is it Ukrainian? Doesn’t really matter if you don’t speak either language. And that is kind of one of several problems with this album. They seem to confine their market to eastern Europe / western Asia. It’s alright to sing / shout to us in a language we don’t understand, but why speak to us? We don’t have a clue what you’re on about. Now that we are on the subject of problems, we must address the issue of keeping your fans interested. Like, all of the time. Not happening here. Not because the main contributor lacks musical skills. Make no mistake, Anton Beloc sure as hell is an accomplished artist. Guitars, keyboards, (harsh) vocals, all no problem for this talented artist. But we’ve heard it all before. And we’ve heard it all being played better. And, the final blow, we have heard more interesting songs.
Best song for me is ‘Summer feast’. Melancholic bagpipes (keyboard?), flutes (again: keyboards?) mid-tempo clean male and female singing, acoustic guitars, clarinet (keyboards anyone?), some up tempo parts near the end, this defines Helengard. Somehow the band does not fit in a known category. The music is rather slow, but certainly not doom, since everything above one riff a minute is considered speed metal. It’s not Dragonforce either. Normally, I would applaud a band for having a distinct own identity. But in this case, Helengard doesn’t deliver anything special at any level. We’ve heard this before with a one or two man band. There is the risk of focusing on what you think is relevant, when the rest of the world doesn’t agree with you. So, not a fan now, not much hope for further improvement.