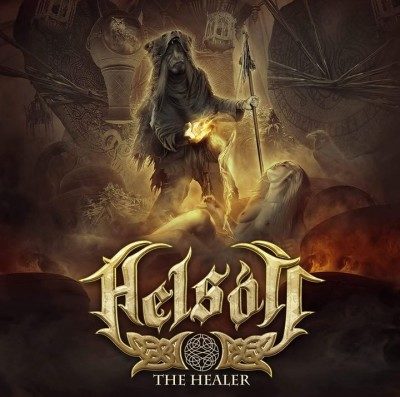 Jump in the time machine with me to 2014 when Helsott released their instant classic debut album “Woven” and laid everyone to waste with their blend of pagan and thrash metal. Still in semi-heavy rotation for me, it was in my top albums for the year and now their soon to be released EP “The Healer” will be gracing the top EP list for 2017. Featuring 5 tracks totaling 21 minutes or so, there are 4 presumably new tracks and one cover tune.
Before you listen a few items of note… first of all, they have been signed to M-Theory Audio which is a brand new label and this is being released on it on April 28th (https://www.m-theoryaudio.com/store). Secondly, they have once again tapped Felipe Machado Franco for another killer album cover (he also did the cover for “Woven” along with covers for Blind Guardian, Iced Earth, Rhapsody Of Fire amongst numerous others) Now to the music.. have they changed in 3 years? Yes and no…. and it is not a super easy to give specific reasons why even after tons of listens. I want to say it is stripped down and maybe less symphonic as “Woven” but it also seems a little thrashier and progressive but not pretentiously so. Let us just say they have decided to show some slightly different things this time around while still retaining their core sound. The 4 original tracks are all in the 4-6 minute range with the cover track being the shortest at under 3 minutes. Opening title track “The Healer” is just Helsott at their crushing best with Eric Dow’s vocals flowing back and forth between his death growl and death shriek while musically they have created a thick and melodic structure as always. “Astralive” I feel has a lot more of that progressive twist I mentioned earlier with riffing that goes in a multitude of directions with subtle tempo changes along the way. “Taverns Tale” shows more of that thrashy side this time around with an up-tempo beat throughout and the return of some backing female vocals. Next is a super interesting cover…. “Unconscious Power” by American progressive hard rock band Iron Butterfly (of “In-A-Gadda-Da-Vida” fame)…..taking a song that is almost 50 years old and Helsott-ing makes for another highlight on this. Their version is pretty true to the original and pays homage to one of the founding fathers of heavy metal and another Southern California export (Helsott is from the same locale as IB in the San Diego area). EP closer “Epic Battle” is probably the most adventurous track on here, reminding me a lot of their opus from “Woven” in “The Sacking Of Lindisfairne” albeit only half the length……the closer really packs all of the Helsott punch in one track from the vocals, guitar and bass interplay, female vocals and pounding drums. My only issue is that the EP does end somewhat abruptly and it feels like you could hear another track on here….well, there is if you hit repeat like I do. The mix and recording have a little rawer feel than “Woven” thus having a thrashier feel overall but not at the expense of hearing everything distinctly.
So to sum it up this is another 5 killer tracks from Helsott and a nice return from one of America’s brightest stars in folk, pagan and Viking metal.