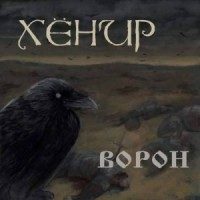 Newcomers Hoenir add yet another band from mother Russia to the scene. Folk metal seems to thrive in this enormous country. Hard to tell whether the band is inspired by nature, ancient beliefs, or tribes long forgotten, because everything is brought to us in Russian. That in itself adds to a very natural sound, but there has yet to be invented a translating machine that can help us understand the true meaning of the lyrics.

Again and again I am amazed by the standard of musicians and song writing from new bands. Shortly after the release of single Ночь Охоты the band gives us their album XEHNP. What we hear is in line with the single, so that was a nice pre-listen if you will. Added to accordion, harsh vocals and plenty of speed is a bit of melancholy in some songs. For instance Ворон contains somewhat sad melodies. That’s actually a great bonus to the otherwise pretty straightforward speedy affairs. In all fairness, single Ночь Охоты stands out, together with Кровная месть. I was a bit curious if the band could already deliver an entire album which is both interesting and relevant. Have no doubt, they absolutely do.

Does the band take folk metal to a new level? No? Do we mind? Not in the least. It’s thorough, the production is pretty good, it’s what we love to hear. So keep them Russians coming!