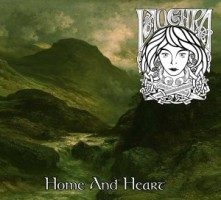 While I am anxiously awaiting the new Celtachor album later this year, the band members have been busy embarking on other projects. For example, guitarist Fionn Stafford crushed my soul with his top 10 debut black metal project Gaoth last year. Now, vocalist Stephen Roche (aka Stiofán De Roiste) has issued his first full length with his solo project Laochra entitled “Home And Heart”. Featuring 9 tracks totaling around 46 minutes, I had eagerly anticipated what he would do with this project after hearing two previous tracks from 2014’s release “Fires On the Horizon”. While I thought I had a pretty good idea what to expect, I couldn’t have been more wrong as “Home And Heart” has a incorporated a multitude of styles, both musically and vocally. Since I have been on such a heathen folk kick lately, there is some of that in a sense here but I strung some words together that really describe what I feel this is……a Celtic black metal soundtrack. If I could take the “Braveheart” soundtrack and meld it with some Summoning and Mithotyn that is what I hear with Laochra but with even more overall musicality. Vocally, Stephen has explored some new territory, most notable a clean, plaintive vocal which has a very soothing effect and pushes the emotion. His black metal style vocal does as well and the two of them combined works in conveying the stories told here. Stephen does employ one of his Celtachor bandmates in David Quinn who handles guitar and drum programming duties, allowing him to concentrate on vocals, whistle and piano which serve as the primary riff creating instruments. There are some nice passages with both whistle and piano which balance in between the guitar and drum tracks. As ambitious as all this is, this is actually a concept or maybe a theme album may be better with a central story……If you have the official download then you can follow the lyrics and understand the concept better. What I will say, it is a bit of Irish mythology mixed with fantasy fiction but it does not require you to listen to the whole album to appreciate the individual tracks. This is just a project that has a passion to it and it is pretty tangible. Some will listen to this and scoff at the semi homemade feel or some of the lack of synchronicity at some points and not really appreciate the content as much as they should…..remember some of those old black metal albums? Yes, those ones that we all now consider classics. I believe what Stephen has done here is finally breathed life into a project long sat dormant and is the first step in what hopefully will be additional stories to tell. If anything most bands should be jealous at what he has done here…..he has created an in-depth album free from the trappings that your overworked studio albums can’t come close to.