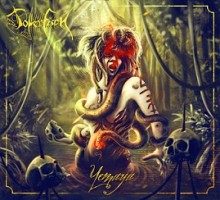 Just based on their name, I would have thought French act Toter Fisch (German for “Dead Fish”) would be Celtic Punk or something way out there. In some sense, I was right as they play skull smashing pirate metal and have put 12 tracks on their first full length “Yemaya”. This 5 piece have issued 2 previous EP’s (“Blood Rum and Piracy” and “Bottoms Up Treasure”) up to this point and now along with the new album, all independently. I would be the first to admit I am not a super fan of pirate metal but definitely certain bands like Lords Of The Drunken Pirate Crew and Alestorm are two that stand out for me and I think Toter Fisch fit in between the two of them quite nicely style wise. If I wasn’t limited to pirate metal comparisons (and I’m not) I would say some Finntroll, Distoriam and Finsterforst could be pretty favorable too. I like my pirate metal to be pretty thrashy, grimy and upbeat and Toter Fisch hits all three of these marks. The music is driven into the seas with standard instruments with accordion giving it the swashbuckling feel. If it wasn’t for the overtly pirate stuff (like tracks titled “Rise The Black Flag” or “The Undead Crew” for examples) I would say that this is pretty standard folk metal. There is a nice diversity in song tempos with some blindingly fast stuff with some slow, down and dirty ones too and they both work for their sound. Vocalist Horgoth LordToad has a thick as fog vocal going on which sounds like he is drowning on some occasions and he really lays down the law and thankfully in English which makes for a more enjoyable listen (especially for us English speakers) At around 48 minutes, this is a pretty well rounded pirate metal album with all of the standard fare for you scallywags.
The mix and overall sound is way above average with a nice crunchy guitar sound, punchy bass and drums with special attention paid to the accordion and vocals (both lead and backing) With a new Alestorm about to break on the horizon, Toter Fisch might just be beating them at their own game. Time will tell what the Scotsmen will bring but until then, “Yemaya” could be the best pirate metal album released this year……killer debut album.