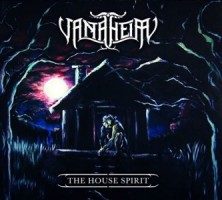 Holland is not exactly well known for their many folk / pagan metal bands. So understandably, if there is a new kid on the block, all of us are very interested. As some of you may know, I’ve been following Vanaheim for a while now. And even had the pleasure of playing a song with them while celebrating my birthday. So I’ll try not to be too soft on them, or too harsh to prove my independence.
First release being an EP with 4 songs. Let’s bring out our checklist. First of all we must establish whether the band deserves a place on your beloved website. Folky enough? Yes, mostly from accordion and several other folky instruments. Metal enough: oh yes, not to worry. Over then to quality. Variation? Present, in length and character of the songs, in speed, in vocals. Instrument control? Without question. So far so good. Let’s listen to the individual songs.
For starters ‘The dwarven chant’. This song alone presents many of the aspects that define the band. A little bit of clean harmony singing, you may find with the likes of Korpiklaani. Lots and lots of speed, but not so one-sided that you tend to lose interest. Growls joining the party. You may have heard the song on the band’s Facebook site where they published a lyric video a little while ago. Nice start!
On we go with ‘Domovoi’. Rather interesting rhythms. Not exactly progressive, but hard enough to headbang to. Some atmospheric parts before the violence continues. It is clear the band has put in a lot of effort creating interesting songs. They haven’t chosen the easy way out.
Talking of variation, ‘Forefather’s awakening’ has an feel that rather deviates from the other songs. Apart from some chanting it’s instrumental, it’s slower. Close your eyes and you may fancy yourself in the company of ancient Russian or Native American peoples in the middle of the forest, hailing to the gods. So it’s different and yet totally in place between the other parts.
Grand finale is ‘Daughter of the dawn’, playing almost 10 minutes. A nice calm start, acoustic strings, again forest-like sounds. And within a minute growling, fast paced drums, let’s go metal. And just as soon, the calm returns. Then a typical folky part with accordion, counter rhythms. There is all sort of things going on. And you know what? The band pulls it off. It takes balls, determination and believe in yourself to release such a song on your first public appearance.
So, you may ask, does your objective reviewer see no flaws? Well, yes, he does. A few in fact. First and foremost, the overall sound of the EP does not convince me all the way. This starts after half a minute in ‘The dwarven chant’. The drums settle in, but they do not sound dry enough. It’s just a bit too messy. In ‘Daughter of the dawn’ the keyboards sometimes drown all the other instruments. There is room for improvement production wise. Furthermore, looking at the cover, I kind of get the same feeling while watching the lyric video. Why not put in a few extra hours or euro’s to give this the same quality as the song writing? It would present the band even better.
Highlights on the other side beat those few flaws by far. Zino’s singing, Mike’s bass playing and as mentioned, the song writing are all big plusses. The combination of serious metal and happy melodies definitely work for me. For fans of Finsterforst, Equilibrium, Korpiklaani and in fact any pagan / folk metal band: go to Spotify now and check them out.