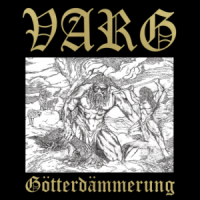 Following up one of my top albums from 2016 (“Das Ende Aller Lügen”) Germany’s Varg is already back at it with a follow up in a presumable all new 4 song EP entitled “Götterdämmerung” (“Twilight Of The Gods”) At around 16 minutes, it is relatively short but in what has been recent fashion for them, it is nothing but steam rolling pagan metal. I am still as mystified at how they have changed their sound and now everything they are putting out is skull crushing. I felt it necessary to go back and listen to some of their older material to find the reason. A major part of it seems they have gotten away from any sort of folk instrumentation and kept it lean and mean with guitar, bass, drums and vocals. The tracks themselves have a different vibe altogether as well with more hooky riffs and relentless tempos. While I wouldn’t say this is as brutal as “Das Ende…..” it still has tons of some pretty heavy stuff on it. The title track serves as the opener and it definitely could have been included on “Das Ende……” with a steady pounding double bass throughout and plenty of stops and drops. I could definitely hear some thrashiness in here too as well in next track “Hel” with a lot of single note riffing. Next track up “Beißreflex” continues with the riff fest albeit not as frenzied. Final track “Knochenpfad” is the most “back to reality” with a slower overall tempo with a spoken word intro and more of a creepy horror style to it. I’m not sure if there is an English version of this EP kicking around as there was in the case of “Das Ende…..” as the EP is sung in their native German. I don’t necessarily like that idea of two different versions but in Varg’s case I thought the English lyrics helped push the “anthem” style tracks. This is a decent EP but I would not say it is on level with “Das Ende….” but it shows some nice diversity while still being heavy and having a similar tonality and heaviness. Another solid release by Varg and a continuation of what they have done recently with a “no holds barred” approach for the most part with a little restraint this time around.