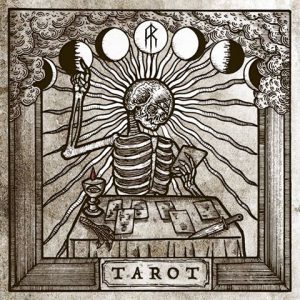 My expectations were pretty high when I heard that a new Æther Realm album was finally coming out. 2013’s “One Chosen By The Gods” is a spine buster if there ever was one so a sophomore effort from these North Carolinians had a lot to live up to. Well, expectations have been crushed and sent off as their 2nd album “Tarot” kills on numerous levels.
Featuring 11 tracks totaling 73 minutes, “Tarot” hits various styles and tempos along the way and shows a huge amount of diversity, heaviness and musicianship. With one track having been previously released as a single (2015’s “The Chariot”) the rest of the album seems to be all new stuff. With tracks titled like “The Fool”, “The King Of Cups” and “The Emperor”, you will see that there is a common thread in the song titles (yes, they are Tarot cards) but this does not seem like a concept album at all. One super bonus part of this album right of the bat is song lengths…..a few as short as 3 minutes with an epic album closer topping 19 minutes. The styles here are all over the folk metal map and is another exciting part of this album with tracks reminiscent of Vesperia, Ensiferum, Wintersun, Alestorm, Trollgasm and numerous other favs. If they stuck with one style I think the album would stagnate pretty quick but jumping from blast beat face smashers to half tempo, more serious tracks to longer built intricate ones makes for an exciting listen. All in all, it still sounds like Æther Realm with their symphonic death/folk metal style still omnipresent throughout. While their core sound is still intact they have ventured outside their typical sound especially on tracks like “Death” which is a morose, dirgey track which may be my new fav from them to party central tracks like “King Of Cups” which methinks I hear some Mr. Bowes from Alestorm lending some vox to this booze laced quagmire. The crowning achievement here is definitely album closer “The Sun, The Moon, The Star”. At over 19 minutes it has all of the best of AE in one track from various vocals to shredding guitar to blast beats and keys arrangements and luckily it sustains itself for the full 19 and doesn’t run out of steam. The mix and production are crunchy and gritty, with a biting guitar sound and pounding drums and has a very “metal” feel to it.
For those expecting “One Chosen By The Gods Part 2” and wanting another “Swampwitch” I am sorry to say it isn’t here because what “Tarot” is makes the debut pale in comparison and much more. The boys have put it all together on here and it definitely shows from the song writing, the various styles and the chances they have taken here. A definite album of the year contender without a doubt.