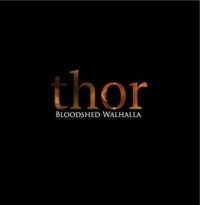 There are a ton of bands out there influenced by the masters of Viking metal (namely Bathory and Falkenbach) with Italy’s Bloodshed Walhalla probably as close to a tribute act to either of them as there is. On their 3rd full length entitled “Thor”, Bloodshed Walhalla continue to use the template that Quorthon and Vratyas started and to some degree of success on their latest album. When I say they, I mean single member Drakhen has put together 8 tracks totaling well over an hour. Trying to put any sort of music together can be challenging and longer ones even harder but BW average track length is almost 9 minutes here with two super long tracks (“Day By Day” at 17+ minutes and “Tyr” at over 12) In a previous review here of the last album (“The Battle Will Never End” from 2012), our reviewer had a lot of negatives to say about the whole album which I thought were a little harsh but understandable. You are not really going to hear anything earth shatteringly new here as it sounds like tracks you have heard before. However, I do like the familiarity of it and there is even some parts (especially keys and choral vocals wise) that are Moonsorrow-esque on some level. The tempos are of the mid paced variety with some more upbeat sections. Whether or not this is a concept album could be up for debate since there are numerous spoken word sections that give it a concept album feel. I think this is a pretty decent album from a song perspective with solid production and just an overall nice listen. Again, no real major points for originality as it all seems like it has been done before. If you are going to borrow a style from someone, at least Bloodshed Walhalla has chosen the best in the business. I would like to hear something a little more distinct style wise on a future release but for now, think of this as tracks that could have been on the “Nordland” albums and you wouldn’t be too far off…