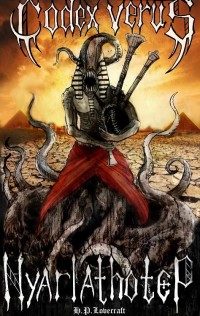 ‘Nyarlathotep’ is the third single Russia’s Codex Verus’s produced since their EP ‘Der Erlkönig’ of 2013. There’s not a whole lot to digest here, it are only three songs, but each one is quite unique from the other. With ‘Nyarlathotep’ displaying more of an ancient Egyptian theme as compared to the first single Die Loreley which is much more medieval feeling. Interestingly enough all the musical themes are mostly held down rather well by bagpipes.
Definitely an unusual way to interpret different cultures, like Egypts, musical styles. It does however work very nicely. Couple that with an industrial / electronic backbone through it all and Codex Verus begin to carve their own sound.
While the bagpipes do lend a folk feel to the songs , Codex Verus is in the vein of bands like Corvus Corax or Tanzwut. There’s a very industrial undertone to all the music, some of it bordering goth/doom. This tends to actually give more variety to the songs and helps span multiple genres rather than just resting in one. It was strange at times hearing bagpipes play middle eastern music but it was fitting somehow and worked better than I’d have guessed. If a full length carries this kind of variety, I don’t see myself getting listening to it. Many of the themes, musically and lyrically are pretty familiar territory in the folk metal world, the combination of said elements work well together and makes me curious for the full album. Based on these three songs alone it’s a safe bet that full length will be world spanning and epic.