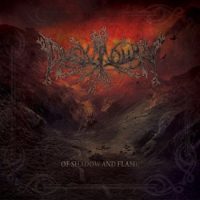 If I had to take a guess (and a pretty good one at that) the last Duskmourn album (2014’s “Legends”) would be in my top 3 most listened to albums of the past 3+ years. Rooted in Tolkien lore and black metal/dark folk has never been so polished on a debut and I probably robbed them by only giving it a 9. Well, now I can redeem myself with the new album coming out, again independently released, in June entitled “Of Shadow And Flame”. While there are less tracks overall (7 as opposed to 9) they have left out the instrumental offerings from “Legends” with just an intro instrumental piece (“Ancient Whispers”) and packed 6 skull smashing tracks after it. Knowing the members of Duskmourn personally (Walter Deyo and Bill Sharpe) they had mentioned to me at some point they were going to go heavier which seemed impossible to comprehend and not really necessary as I find them plenty heavy. So, is “Of Shadow And Flame” heavier? Well on some level it is with maybe the tempos and the riffing but I still think it is on par with “Legends” in terms of overall heaviness. I would say if anything it is darker and not necessarily heavier but more streamlined and pulverizing. They have taken a step or two away from the Tolkien black metal tag/label and have carved a new path thru the forest. My concern by going slightly heavier would have been if the songs would be as memorable and after one or two listens, I was humming riff after relentless riff in my head so I know they were on to something.
Stylistically, I would say they are Moonsorrow-esque on some level with a nod to eastern European/Russian/Ukrainian acts like Nokturnal Mortum or Drudkh but with added touches of harmonies and key arrangements. Lumping them in with the “traditional” Tolkien inspired acts like Summoning aren’t really warranted as symphonic death/black/folk metal is where Duskmourn lives. Walter’s voice has never sounded gloomier, Bill’s drumming has never been more avant-garde and their combined guitar and bass playing has grown exponentially from “Legends”. Their counterpoint playing with the main chords and the arpeggios are like 2 halves of the same whole and work every time, whether it is the guitar or the keys creating the primary instrument or riff. Lyrically, I would say “Of Shadow And Flame” is similar to “Legends” with subject matter centering around woods, mountains, streams, black skies and nature in general. From the beginning of “Through The Wild” to the closing track “The Last Voyage”, there are no missteps or bum tracks as this is all killer. Another sonically perfected mix and production again with a nice smooth drum sound and tangible guitar mix with keys and vocals blending in perfectly and augmented where necessary.
There is a lot of competition looming on this year’s release list and potential album of the year candidates. “Of Shadow And Flame” has easily earned my first 10 of 2017 with an amazing release. Duskmourn has climbed to the top of the mountain first with their 2nd album and is my front runner for album of the year and is standing waiting for someone to knock it from its perch…..good luck everyone else.