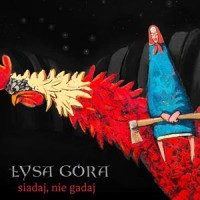 Listening to Łysa Góra second album ‘Siadaj Nie Gadaj’, you recognize them at once. The solid folk by these Polish band is quite recognizable, so I’m scanning this record for proof of grow or development in a certain direction. But with every spin of the record, the feeling grows, there’s something different here, but I can’t put my finger on it at once. So, I gave the first album a closer look and while I’m reading the info, I noticed a small change. The altered their tag from village metal into heavy folk, and that’s what bothered me all the time. A wisely chosen tag. Despite of the fact the metal tag keeps you out of some places, this description fits the music of the second album better. It’s quite like the first album, but all a bit more polished, more sophisticated, topped with a hint of the somewhat jazzy gypsy kind of playing. Where the first album put me in the middle of a townsquare this album gives me more the idea I’m sitting in a club where intellectuals and dissidents meet.
Don’t get me wrong the changes are very subtle, but they’re there. The first album was more spontaneous and I liked that in Łysa Góra’s music, but on the other hand, the improved musicianship on ‘Siadaj Nie Gadaj’ is very nice as well. The title of this album Sit down, and don’t speak, fits this slightly improved sound as well, instead of join the dance, you get to listen more to the music on this one. But the basics of both albums are the same, great folk, with a nice solid foundation, let’s call it Heavy Folk!

Difficult to say if this albums sound better then the first one, I liked the spontaneous sound of their first album more, but there will undoubtedly be a lot of people who like this album better. But this doesn’t matter in the end, Łysa Góra proved again their up to a lot of good music.