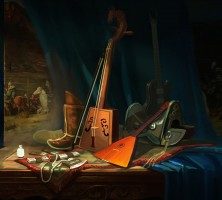 Einheit Produktionen is re-releasing the first two albums of Nine Treasures. The band won the Wacken Battle in China a few years ago and ended up second in the overall Wacken Battle, since this was at the anniversary of Wacken, you can see them on the Wacken video as well.
‘Arvan Ald Guulin Honshoor’ was their first album, released independently in 2012. A year later their second album was released and we reviewed that at Folk-metal.nl in 2013. So, Nine Treasures wasn’t a new band to me. If you have waited until now, when Einheit Produktionen re-releases this Chinese treasure, you have a perfect reason to read our e-zine more often, it would have saved you 4 years. While Tengger Cavalry is becoming quite a name in the USA, these guys of Nine Treasures, deserve this as well.
Both bands create a fine metal sound fully blended with Mongolian music, including throat singing. The use of traditional Mongolian instruments, give it all a very authentic sound. It’s a joy for your ears to listen to your portion of folk-metal, but this time with a Chinese twist. This first album sounds a bit more unpolished as their later ones, but hey, who cares. This put down perfectly what they’re planning to do.
When you like this Mongolian metal, and why shouldn’t you, you should add this one to your collection as well. Their sound gets even better with their second album, but this one is more than OK too. The Metallica cover on the album shows the band is a bit searching for their sound, but this album will surely have proved to them, they stepped on the right path.
And I can tell you, this is a very nice album and more nice stuff by these guys have been released in the years after this treasure first saw the Eastern daylight. Great stuff!