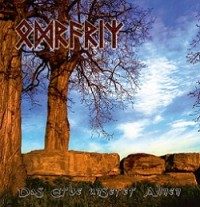 I doubled checked my math and yes, it has been 7 years since the last release from Germany’s Ordoerir (2010’s “Götterlieder II”). Now they have returned with the release of a new album entitled “Das Erbe Unserer Ahnen” (my translation is “The Heritage Of Our Ancestors”) coming this June on their label Einheit Produktionen. I have been pretty addicted to some heathen folk this year (Wolcensmen, Runahild and Byrdi) and I would put this in the same sub-genre as them so of course I’m going to be into it. The album features 7 tracks totaling about an hour so average track length is over 8 minutes which enough time to get lost in the ripples of this great “comeback” album. Comparison wise besides the aforementioned acts, I think Wardruna is the most favorable but maybe a little less brooding and more folky or even Sowulo at least on this album in particular. With omnipresent mouth harp, acoustic guitar and layered vocals and percussion, “Das Erbe…..” is a deep and meaningful listen and has tons to offer. While it has structure to the tracks, it does have a bit of a “jam session” feel with a basic riff(s) being laid down and then the other instruments and vocalizations finding a home over the foundation. I had visions of a roaring campfire while this was on and you’ll get that vision to while listening….very rooted in nature and folklore. Some may want the metal touches here and there as they have done previously but those are not here at all and this album has more of a soundtrack/instrumental description going for it. The production is relatively transparent and natural sounding as acoustic/folk instruments should sound and the vocals have nice amount of reverb/echo adding to the foresty feeling here.
I think a few shorter tracks would have made for nice change of pace on the album as all of the tracks of extended length tend to start sounding like one big long track. Overall, a nice listen and a welcome return in top form for Odroerir…