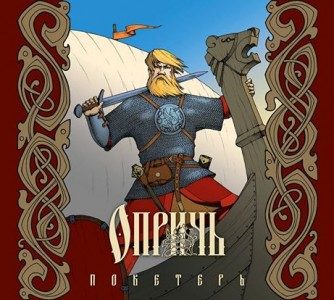 Russia’s Oprich have been in existence for almost 20 years and took quite a while to start releasing music with their first full length coming in 2010 (“Север Вольный”) (“North The Boundless”). Now May 2017 sees a 3rd full length entitled “All Sails To The Wind” (Poveter) for their label, the mighty Casus Belli.
Featuring 10 tracks at around 37 minutes, Oprich have once again created a solid effort steeped in Russian history. Not familiar with Oprich? I don’t know if there is another band I could directly compare them to as they have a unique blend of folk and pagan metal with a crossover/hardcore foundation….even a little progressive at some points. You really can’t compare them to the swampy St. Petersburg bands as they are a little more rooted in more contemporary metal with flute mixing in to add folky touches…..maybe a Russian equivalent to Grimner? Possibly but more brooding. “All Sails…..” celebrates the history of Russian Vikings namely the Novgorods (yes they are not just Scandinavian) and brings to light their importance in history. While all the tracks touch on the subject I would not call this a concept album. The tracks are relatively short (2 ½ to 5 ½ minutes or so) which works for their style with tracks being sung in Russian, featuring both death/black metal as well as baritone style vocals which give added dimension to the tracks. There are some up-tempo moments but most tracks I would say are mid-tempo with staccato riffing and percussion thus giving it the hardcore comparison. “The Ruthless Ones” as an example is probably the most consistently up-tempo since it is a little more linear in terms of song writing and could be compared to Amon Amarth. Tracks like “Winds Heady Mead” (yes also the title of the 2013 EP) prominently features the Vargan (mouth harp) and there are some hints of Zhaleika (Russian horn) throughout but the flute is definitely the easiest to pick out. There are also some female vocals thrown in showing yet another layer to their sound, most notably on album closer “Danube Lullaby”. After a few listens the tracks will certainly become more memorable and their style grows on you as something different and unique. Production and mix are nice and tight with a punchy bass/drum attack and thick guitar sound with a blended vocal and distinct flute. All in all, a solid 3rd album from these Russian berserkers and doing their forefathers proud in shedding light on their chapters in Russian history…