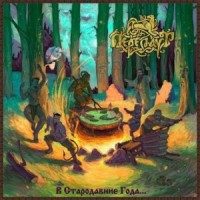 Russia has sent out an incredible amount of folk metal over the last few years. Joining the invasion and hailing from Tomsk in Siberia, Pereplut have just issued their first full length entitled “In Ancient Years” (my translation). Independently released, the debut features 10 seemingly newer tracks totaling about 42 minutes with the exception of a single (“Тропою Волколака” from 2016) which has been included on here. If you took a cross section of Russian folk metal acts from the folky/swampy Saint Petersburg stuff to the symphonic Moscow acts and the out of control Siberian groups, Pereplut fit nicely in the middle of all of those sub genres. Outside of Russia comparisons, I thought of some of the older/darker Korpiklaani releases could be the closest comparison although they are not accordion driven but opt for a mix of flute, whistle, violin and other folk instruments. The band appears to have 6 full time members along with some guest appearance for this album and they have a nice variety of tracks here with some folkier tracks with some heavier/more metal tracks. One look at the killer album cover (forest demons stoking the fire of a boiling cauldron with an elf in it) is a great indication of what is inside. Folklore laced tracks with death/black/thrash vocals is always an awesome listen, even if lyrics are in Russian so not really sing a long material for me but still enjoyable. They are more successful when they deviate from the Pereplut template on tracks like album closer “По Мхам Крадущийся Незримо” (“Mosses sneaking invisibly”?) where it is subdued and an instrumental. What I am saying is they should explore some more diversity when it comes to tempos and track styles as a lot of the tracks do start to sound very similar to each other. I think they missed an opportunity with having so many members that they could have explored some different vocal options here too. All in all, it’s a pretty decent debut, fun to listen to with some solid material. The mix is where it needs to be with some pronounced bass and drums, thrashy guitar and natural sounding folk instruments and vocals. A promising debut from Pereplut and a strong release from these Siberian folksters.