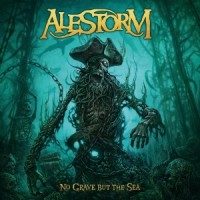 If you’ve been listening to folk metal anytime in the last twelve years, you’ve probably run across the most prolific pirate metallers around. Alestorm is easily one the biggest acts in the genre and have been pushing landlubbers of planks since 2004. No Grave but the Sea is their fifth studio album and is chuck full of all the tongue in cheek scurviness

we’ve come to love about them, and few nice surprises that really make this some of the strongest songs they’ve put out since Captain Morgan’s Revenge.
The album opens with the titular No Grave but the Sea and it hits heavy in all the right spots.
From the very horn heavy keyboards to the surprisingly technical guitar riffs, the music feels like the band have really gelled together and can keep this pirate metal beast alive for years to come. There’s plenty of proof of this in songs like To the End of the Earth and the name sake anthem Alestorm. These songs were much heavier than I’d expected from these boozy buccaneers, the addition of harsh growls to back the usual piratey vocals I’ve come to both love and occasionally eyeroll at breathe some life into the music.I know they’ve done it here and there but I think they nailed here.
The music it’s self felt more cohesive and heavier as well, the guitar leads were nice and thrashy and never got boring. This definitely seems to push usual power metal tinged sound into darker and heavier waters. As far as the music itself there’s not one song here that doesn’t have a polished and solid sound. Alestorm’s charm lies in their silly songs of drinking and plundering, they’re catchy, solid and all around fun to listen to. Pirate Metal is what Alestorm does and they do it well, but sometimes the lyrics and pirate voice can be a bit gimmicky as well. Songs like Mexico and Treasure Island get a little boumcy and silly for me, luckily there is not much of this and as a whole No Grave but Sea really delivers some new ideas to some familiar territory. Even if the scurvy vocals aren’t your thing the music here eclipses that and keeps Alestorm interesting and fun to listen to, and show they can swashbuckle with the best of em.