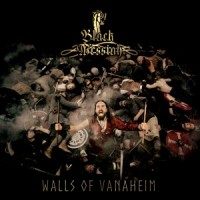 The Walls of Vanaheim are German Power/Viking metallers Black Messiah’s seventh full length album. Taking the form of full on concept album The Walls of Vanaheim uses an audiobook approach to telling the story of The Aesir/Vanir War and is a continuation of 2009’s First War of The World. The album opens up with narrative that actually takes place between all the songs, at first listen I felt this approach might not sit well with me, but it’s actually done pretty well. And after a dozen or so listens I find I don’t skip them still. It all starts with murder of Odin’s old friend and advisor , the giant Mimir, and tell’s the story of the subsequent war between the old Norse god tribes the Aesir and Vanir. From the march on the Vanir’s stronghold of Vanaheim to the final treaty of peace between the tribes of the gods. All the narration is done with music and sound effects kind of like a movie score helping keep them engaging to hear, and you have to love the subject matter too. It’s an interesting approach and has a resulting humanizing effect on the gods of Valhalla.
The music itself isn’t unlike the last couple Black Messiah albums they mix viking/black metal with a nice touch of symphony/power metal, not a bad combination when going the route of a concept album. It’s very riff heavy with thrash elements with some nods to classic composers like Beethoven and Mozart. The inclusion of violin driving the songs add to this end. There’s some nice black metal moments sprinkled throughout the breakneck Wintersun/Insomnium type riffs. For the most part Walls of Vanaheim keeps this tremelo picking, arpeggio laced action through it’s entirety but my personal favorite moments were songs like Die Burde des Njord where the band slows down a bit and shows of their darker black metal roots. Black Messiah does the power metal side as well as anbody you’ll find out there but I’m a big fan of the mid paced swagger you’ll find in Kvasir. These songs definitely showcase their technical side while building tension and emotion.
Walls of Vanaheim does a great job of telling a story without confining the music to the narrative. You could listen to the songs without the narrative tracks and it’d still be a massive record, I just felt they enhanced the experience. But like I said if that’s not your cup of tea you could always skip through them the music is solid and speaks for itself. So whether you like stories of the ancient gods or just really good metal Walls of Vanaheim has you covered.