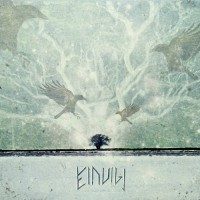 What will happen if you blend music from Alcest with Moonsorrow? You’ll get something like Einvigi, I suppose. The band released a first EP and it’s quite a tough one, I would say. It’s quite a mix of acoustic folk, altered with walls of sound, like we know them from bands like Moonsorrow, but all with soothing vocals. I feel like in a moshpit, but not because I want to let it all out, but I feel like I’m thrown back and forward by this. I can’t grab the essence of it. I like these massive walls of sound, but I can’t appreciate the vocals. I hope there’s an audience for this music, because after listening to it many times, I still can’t figure it out.
I surely like the solid instrumental parts, and I can appreciate the pieces where the instruments creates this melodic noise and the vocals are quite soothing. But I can take the softer music and then the vocals bother me a bit, but then a little grunt is thrown in and I don’t know it anymore. Should I stay or should I go?
Paranoia. I think, the best thing is you give this album a listen yourself, because it’s surely worth listening to. Do this, at least once, because the band has quite an unique mix of styles, a fresh approach… This can go both ways I think, but if you like it, you will probably like it a lot!