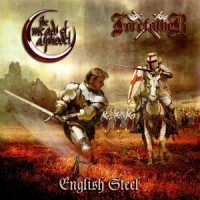 I have been addicted to the last Forefather album (2015’s “Curse Of The Cwelled”) since its release and have been anxiously awaiting a new epic from one of England’s finest exports. It has arrived in the form of what I would call an EP which can be purchased two separate ways…..either as strictly just an EP of the Forefather tracks or as a split with English black metallers The Meads Of Asphodel.
The Forefather only tracks are available directly thru the band via Seven Kingdoms titled “Tales From A Cloud Born Land” or as the split thru Godreah where the combo is titled “English Steel”. Altogether there are a total of 16 tracks totaling just under an hour so you will definitely get your money’s worth. First up are the Forefather tracks which start with an intro instrumental (“Opening”) and close with an instrumental as well (“Daughter Of Twilight” which may be my fav instrumental of the year so far) with 5 other new tracks sandwiched in between. Of course, as always, the tracks are instantly recognizable as Forefather and they have a nice diversity here of styles and track lengths (3-6 minutes) in the 5 they have put together. I would say that in comparison to say “Curse….” or the recent re-issues by Heidens Hart that these tracks touch on all of the various Forefather eras which some half time stuff to up-tempo battle stuff with everything working and sounding. The vocal styles of both Athelstan and Wulfstan are on display, varying between the baritone and death/black metal style which both work equally well with the tasty riffs and tempos. Still killer as always. On to The Meads Of Asphodel tracks now which feature 5 tracks released previously on a vinyl only split from 2015 with US black metal act Tjolgtjar entitled “Taste The Divine Wrath” plus 4 cover tracks. I would say that as black metal goes TMOA are off the beaten path and may not cater to those of you into the more linear/straightforward black metal acts out there. Looking at their discography they have an EP titled “English Black Punk Metal” which I think is relatively close as far as a description of their style goes…..maybe some good ol’ Abruptum, Venom and Darkthrone as comparative acts? I can’t say I am super familiar with the cover songs so I don’t know how true to the originals they are but I definitely sense a “tongue in cheek” approach to a lot of what they do…..serious to a point with putting out tracks that have an antagonistic/provoking way about them. I enjoyed the tracks as just something different than what I normally listen to and held onto the edge on my seat with all the twists and turns.
I don’t know if I would have put these two acts together on one release at face value but I think it works. Great to hear new Forefather and still in top form and hearing TMOA in this format makes me want to check out their discography now. Great split and glad that they were matched up together for a killer release.