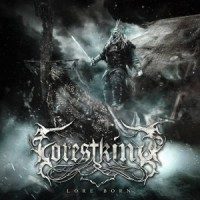 The US has been churning out some amazing music so far this year such as the latest albums from Helsott, Amiensus, Aether Realm and Duskmourn. These are all established acts so no surprise on the quality of their music. As far as debuts go, it has been relatively quiet until now with the release of the debut from Idaho’s Forest King entitled “Lore Born”. Set to be independently released on 6/20, Forest King have put together 9 tracks (intro plus 8) totaling 38 minutes or so in length. “Lore Born” features tracks in the 3-6-minute range which works style wise for them. Band comparisons you may ask? Well I think Helsott is decent with some classic thrash like Testament thrown in with Viking acts like Amon Amarth and Mithotyn in there too. Nothing wrong there……I think a thrash/death Viking act is what I would classify them as. Every track chugs along with above mid paced tempo with flashes of blast beat goodness. I don’t know if I would say there is one “go to” track on here to check out because they are all pretty much on par with each other as far as quality of riffs, vocals, etc. It’s nice to actually hear some guitar solos for a change as a lot of bands have strayed away from them but FK have one in every track. Album closer “Who Will Write Your Saga?” is the most adventurous track here and shows where I could potentially see Forest King head on future releases…..almost 7 minutes long with a slow build riff wise and then the hell is unleashed and then a nice middle interlude part and then back to the heavier stuff.
If you like the first two singles from the album (“Sacred Mead” and “Troll Stench”) then it is easy to say you will dig the whole album. A nice mix and production that has kind of a retro feel to it…..sounds like some old thrash for sure with a little more punch to it.
A nice start of a career for Forest King with a solid debut filled with catchy tracks and heaviness.