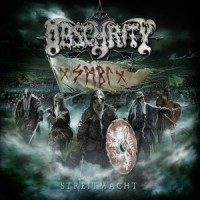 German veterans Obscurity are still going strong after 20 odd years. The band faithfully delivers a full album every three years on average. Not the biggest band in the pagan / Viking scene, so they are true to their name. Do you ever wonder how one band gets famous and the next band doesn’t? Most of the time you can come up with a valid reason. Not enough support from a label, no unique selling point, lack of quality. And then sometimes timing and luck seems to be the decider. That would be my guess as to why Obscurity isn’t a bigger band than they are.

There can be no doubt about the quality of the musicians. They all know their part, instruments are handled just fine, everybody works together as a proper band. No problem either with variation between the songs, the song writing or the production. Well okay, apart from luck and timing the band suffers a lack of originality. Go to Ragnarök or Dark Troll Festival and this is the sort of music you will here for days on end. Not to worry, though. If that’s the kind of music you like, you can’t go wrong with this album. At times a nice rumbling bass line asks our attention, the singer growls and shouts as he’s supposed to. Favourite songs: Hinrichtung (great neck exercise), Herbstfeldzuege (great little bass intro) and Ehre der Gefallenen (midtempo varied with more speedy parts).

How many words do we need to like an album, even if it will not make the top 10 list at the end of the year? Less than 300 in fact. We like.