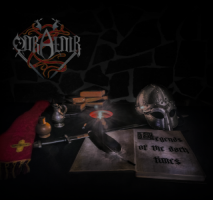 Have you ever experienced the following. At first listen you like an album rather well. You listen some more and somehow your interest fades away a lot quicker than the first time. And then miraculously after a while the album starts growing on you once more. I had a reverse experience with the black album with Metallica, which I can’t listen to anymore. But that’s beside the point. The point being that you really may want to give Odraedir’s Legends of the dark times a few spins before writing them off too early.

Why, you may wonder, would you write off this album in the first place? Two main reasons. The first being that the band plays neatly within the boundaries of folk metal. Mostly unclean voices, folk instruments, speed, fun. All very well, but not extremely exciting or original. Second reason could be that you want your metal to be mean and vicious. This band and this album are not. Sure, metal haters will not like this band any more than they would like any old thrash band. But metal lovers may find the style too soft. A song like ‘Brave souls’ will most likely decide whether you like the album or not. Partly clean singing, not in their native Czech language, rather ‘keyboardy’, very accessible. Where one may like them as a party band, the other may look further for ‘truer’ and more aggressive bands. Sometimes the style even leans towards power metal, for instance in ‘Beowulf and Grendel. Nothing wrong with that in my book, but for some metalheads power metal is somehow a disease they want nothing to do with.

Objective points are rewarded for production, melodies and song writing. The band took their sweet time. After 8 years of existence this is their first full album. They will not conquer the world or even be on the main stage of the big festivals in the coming years. But they will have their own following. And if they can enthuse live audiences, there is no reason why they should not be on a tour with Dalriada, Alestorm and Suidakra. Odraedir has obviously listened to these and a few more bands in the scene. And, although lacking a distinct sound of their own, there is hardly any faulting the band. Call me a broken record, but I really think it’s time for a Paganfest consisting solely of bands from Eastern Europe. If Odraedir keeps making nice albums like this, they should be part of it. Are you listening, ‘Into the forest’?