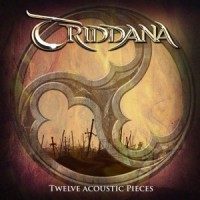 “Wwhatever you play, do it with everything you’ve got. Listening to a song like ‘Everything returns’ it feels like the band is holding back a bit. You can’t do that. Be fast when fast is required, be aggressive, melodic, folky when it is called for. And bring it with heart and soul.” Those are the words of Rein, speaking about Triddana’s previous album ‘The Power & The Will’. Now Triddana is back with something special, an acoustic album, the perfect opportunity to show you musicianship and put your songs in an other perspective.
And there’s nothing wrong with the musicianship in Triddana. Nice guitars, fine bass and drums, and through all these the nice pipes, this forms the nice foundation of their power-metal.
But where Diego gave their music a heart until there album ‘Ripe for Rebellion’, there’s something missing now. The heart, the feel, this withholds you from shouting along with their songs. It seems they’re playing the songs dutiful, and since they’re fine musicians, they can do this well. Don’t get me wrong, the vocals aren’t bad either, but it lacks a bit of spirit.
‘Gone with the River’ is a bit closer to what I’dd like to hear, passion, enthusiasm.