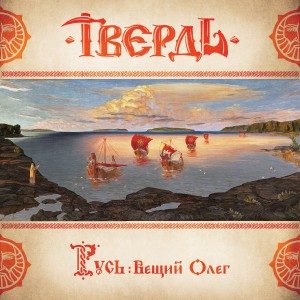 Hailing from Russia, Tverd is a band that can meet you with the true Slavic folk metal experience. After its predecessor Pagan Reign broke up, mastermind Vetrodar formed Tverd right off the bat. The album is built around the foundation phase of the first Russian medieval empire Kievan Rus’ and the mighty Oleg of Novgorod’s several campaigns over Turkic hordes and Byzantine Empire. So, epicness is everywhere as might be expected.
Music-wise, the album starts with a very soothing intro which displays nearly all of the ethnic instruments used on the album. The album is chock-full of rich ethnic instruments topping a background of electric guitars that are fairly successfully composed in terms of distinctiveness alternating with drum parts which I would call “steady” even though blast beats can be heard every now and then. The songs have a varying structure in their own rights. However, I felt the melodies aren’t connected well in some places. The transition between them surely lacks smoothness. But the album is cohesive and sophisticated in general and obviously recorded cleanly.
As for the vocals, the vocals are one of the most distinctive features of this band. Both the male and female vocalists have powerful, distinctive and operatic voices. Yes, using operatic vocals over a folk metal album might be a bold move but in my humble opinion, they arranged it flawlessly. The only thing that I disliked vocal wise was relatively long narrative parts. I guess it would be better if they were kept only a little shorter than they are.
In short, I liked this album. It didn’t bore me even for a second. If you’re up for a folk metal album with rather unusual operatic vocals, rich ethnical instruments and an epic theme you might want to give it a go.