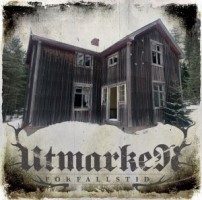 Last year, Sweden’s Utmarken took our coveted debut album of the year and pretty easily at that with their self-titled offering. The debut was rich with killer riffs, omnipresent nyckelharpa and soaring vocals. June 16th will see the release of the 2nd album entitled “Förfallstid” and let it be known right now that there is no 2nd album jinx here as “Förfallstid” has continued where the self-titled album left off and more. I think a concern that I raised in my interview with Utmarken last year was whether or not they could sustain the style that they had on the debut. Mathias Gyllengham (vocalist/nyckelharpa/all other music) agreed on some level that it would be hard to replicate what the 1st album was over and over again. Thus, “Förfallstid” has gone in different directions and all of them work even more so than the debut while still being instantly recognizable as Utmarken. I think the big thing is that Utmarken is truly hard to pin down as far as one genre but if forced to, I would say it is a power metal/hard rock/folk metal combination with varying percentages of each of them depending on the track. This album also adds more of a progressive element into the mix with not as linear riffs and more complex song structures and numerous vocal styles and harmonies. What’s not to like? The first singles that were released (“Bröder I Strid” and “Mitt Norrland”) should have been some indication of the complexity and direction of “Förfallstid” but probably doesn’t really scratch the surface of how great this album is. There is a total of 12 tracks here totaling almost 46 minutes so plenty of material to dive into. Just like the first album, the tracks are all still sung in Swedish which adds a little more mystery especially for us English only speakers. I am still having a difficult time in giving you another band that I could say sounds like them and classic metal/hard rock bands like Led Zeppelin, ELO or better yet Rainbow would be the closest I would dare say….. obviously folkier and more contemporary versions. There are some guest appearances on here, most notable would be our friends in Byrdi crushing the guest vocalizing on “Vintervind” but at the end of the day this all about Mathias and his amazing musicianship, songwriting and vocal capabilities. There is nothing he seemingly can’t do when he puts his mind to it and it is all on display here. I would say there are no “boundaries” when it comes to what the songs are and where they go and the adventurous nature of them gets me every time. The powerful nyckelharpa, the crunchy riffs and new slightly riskier progressive song structure and most of all his incredible vocals, both in primary and backing form. Textured and emotion filled, he may have the vocal performance of the year for me. While this project hasn’t broken thru mainstream wise, I am OK with this being my little secret if no one else gets into it as much as me. The mix and production is top notch once again performed by Kalthallen Studios and I am looking at a roster of some of my favs from the last year that have gone thru here (Byrdi, King Of Asgard, Eliwagar, Myrkgrav, SIG:AR:TYR) so I knew even before hearing it that it was going to be killer. As equally indescribable as they are awe inspiring, Utmarken have put out another incredible collection of tracks for the listening. Album of the year contender? No doubt about it and deservedly so…….a mazing album.