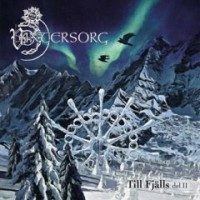 Sweden’s Vintersorg is nothing if not super prolific and equally indescribable style wise….. at least not from album to album since you never know what to expect but quality music, whatever the style is. This I think has hurt them on some level as you may really like one album and the next one, not so much. Whether it is jazz, fusion, acoustic, experimental, progressive, etc. Vintersorg does have a style and a sound which pushes the boundaries of numerous genres. As far as what we cover here on the site, there is no question that the seminal album “Till Fjälls” from 1999 may be one of the archetypical album that many acts would soon follow the template of. Fast forward to 2017 where there has been a sequel recorded of sorts in “Till Fjälls Del II” (“The Mountains Part II”) and I feel is not necessarily meant to be listened with the first chapter as it stands alone as another fine piece of musicianship. There is actually some bonus music here too….more on that later. I think comparatively you will hear some of Mr. V.’s other projects (namely Borknagar and Cronian) in here somewhere but I think memories of Otyg were washing over me listening to this (Mr. V.’s far too short folk metal project with guitarist Mattias Marklund from the early 90’s). The album features 9 tracks totaling about 52 minutes or so with a 5-6 minute average track length and now to the bonus part…… 4 additional early Vintersorg tracks re-recorded from what would have been on the very first EP (1998’s “Hedniskhjartad”) but did not make it on for one reason or another….. a great way of connecting the older recordings to the new and allowing you to hear how they have gotten to where they are now. This album is one that you instantly get into……no multiple listens necessary to start latching on to track after killer track. Floating in and out of symphonic, folk and black metal touches never sounded so seamless and polished. Epic track after epic track, “Till Fjälls Del II” delivers the goods and I think could easily become their biggest album in terms of overall accessibility and quality of tracks. While I can’t say there is anything that is super unique in terms of treading new ground, there is a certain familiarity to the tracks that make it easy to get into and listen time and time again. A nice mix and production help propel it along with a balanced blend of heavy and clarity. If you need to suggest a well-rounded metal album touching on symphonic and folk, this is the one to send them to. Congrats to Vintersorg for another amazing chapter in their history….