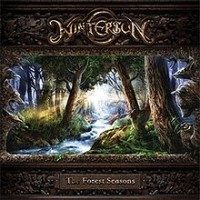 There are albums, which, one way or another amazes you in the end. With its rather unusual creative concept, this album, without a shadow of a doubt, is one of those albums. They wanted to adapt Vivaldi’s well-known “The Four Seasons” into metal music on this album and I have to say that, this is a brilliant idea. When I first heard of this idea, the mere thought of it was enough to make me ravished with delight. The album consists of four tracks, each of them being very long and complete, over 53 minutes of solid material is enough to whet everyone’s appetite, I suppose. The previous Wintersun album Time I was definitely not that long for many people but this time it’s quite sufficient. First off, each season represents its characteristic features pretty well. The album kicks off with the spring track which is ‘Awaken From The Dark Slumber’. And it represents an ‘awakening’ theme in general as it can be figured out from the title. Jari seems to have developed his vocal skills quite a bit. This was the first thing I noticed in the first place. His brutal vocals are even more intense, more powerful than ever which I would call “Just as it should be”. In the first six minutes of the song, sort of a gloomy, if not ominous atmosphere is displayed since winter isn’t yet over; while in the last 8 minutes of the song the overall pace stirs up and that uplifting 3-men-choir shows up. The gloominess within gets yanked out by means of the last part once and for all. Which is the another point that I liked very much. The summer track “The Forest That Weeps” is a solid track. Adorned with choirs recorded separately and a pretty catchy intro/outro. Those which are in the beginning are the high octave recordings and those which are in the end are the low octave recordings which I personally liked even more. Had they kept that repetitive riff in the middle of the song shorter, it would’ve been an impeccable song in my humble opinion. Speaking quite frankly, that part bored me to a certain extent. But overall a solid track with excellent choirs. Now let’s take a look at my favourite track on the album. “Eternal Darkness” which represents autumn. Darkness and death are all around. The lyrics were written from the perspective of death itself, I guess. How it perceives life as a mistake in the universe and how everything will eventually die and the world will be wrapped in eternal darkness. This song is chock-full of keyboard effects and blast beats which make it extreme. However, something was missing in my mind but when that solo part kicked in I had found what had been missing and felt quite satisfied. It’s definitely my favourite track. The last song Loneliness (Winter) begins with a very touching kantele melody which I found very creative and is a melancholic song in general. Jari’s vocals are definitely at their zenith in this song. Very successful song, it gives you the feeling that everything is in sleep, not a single creature stirs outside. I literally pictured this inside my mind while I was listening and I think, this is what they intended to do. Overall, a great album. I hope, this sort of creative concepts in the metal scene increase over time.