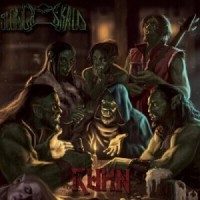 There is no way if you heard this for the first time that you would know where these guys and gals are from, but I bet you would guess eastern Europe or Russia. Not too far off but Italy is where they originate from with their brand of semi-swampy folk metal. This 6 pieces from Rome have issued a previous EP (the tongue twister “Tefaccioseccomerda” from 2015) and based on that were scooped up by the mighty Soundage to release their debut album “Ruhn”.
There are 2 of the albums 10 tracks that are carryovers from the EP (“No Grunder No Cry” and “Blood And Feast”) with 8 new ones having the album total in at almost 43 minutes. They are what I would call a “mixed bag” of styles but are swamp-centric to a point…..they do call themselves “orc folk metal” and do have a brooding sense to them but with some nice clean violin and accordion to give them some more of a traditional folk metal sound. I think if you mixed some Varang Nord with Trollfest, Svartby and Finntroll, I think that would be your closest combination to a Blodiga Skald style description. Most of the tracks are in the 3-4 minute time window which works well to get the songs across and on to the next one. The accordion/keyboard and violin usually tend to be the riff definers and are augmented with the guitar, bass and drums with deathy growl vocals.
There are some good drinking and battle songs on here and that seems to be what most (if not all) of the tracks are about…..and I’m not complaining either. I wouldn’t say they are breaking any new ground but I would say they are catchy and adept and have found a style and a sound that is solid and juicy. The mix and production are maybe almost too clean for their style…..or maybe I am just used to hearing low fidelity/homemade swampy metal. The instrumentation and vocals are nice and tight, clear and easily discernable.
A noble debut from Blodiga Skald and one that will find you hitting repeat numerous times for sure……