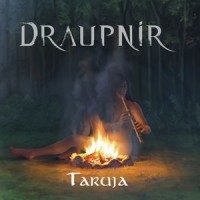 Start with Black Messiah, and take one step in the direction of Ignis Fatuu, and turn you face north in the direction of (early) Svartsot and Kivimetsan Druidi, and then you’ve reached the endless wealth of Draupnir. These Germans released their first album ‘Taruja’ in 2016 already, but fortunately reached us recently. When you start to listen to you immediately feel familiar with the music. You haven’t heard it before, but it’s certainly nothing new either. The male vocals, with their shouting kind of singing remind a lot of Black Messiah and you replace the violin for Draupnir’s recorder, there are even more similarities. But Draupnir’s sound is a bit friendlier, less harsh. With the sound of the recorder and the way this instrument is played they have little pheromones of Ignis Fatuu. The music is pretty decent and the compositions are too, the music sounds pretty clear stripped of too much distortion and the keyboard restrains itself and isn’t filling the sound to the edge with notes, this gives it quite the open sound which is needed for the recorder and male and female vocals. Katharina’s voice is from a classical school and sounds very skilled, where these kind of vocalists tend to balance on the top of their reach, this sounds all safe and sound with her voice. The combination with the low dark male voices is nice, but could gain some dimension. The vocals can’t keep my attention all along the songs.
But overall this is a nice album and considered this is their first one, I was rather surprised by the quality of the album. I would say: ‘Zugabe’ (we want more).

Draupnir is a band which certainly belongs a spot in the German folk-metal scene. With ‘Taruja’ they released a very decent album. A band with potency, that’s for sure.