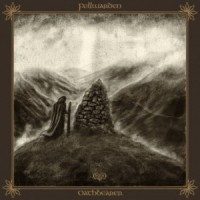 It seems we haven’t had a lot of atmospheric black metal/dark folk come thru here this year so far until now with the debut from England’s Fellwarden entitled “Oathbearer”. Released on Eisenwald (home now to Viking doomsters The Flight Of Sleipnir and the epic new project Pillorian), the debut features 6 tracks totaling just under 50 minutes of grim and cold tracks. This project features two members of Fen.. The Watcher on vox and instruments and Havenless on drums… and no this does not seem like tracks that Fen didn’t use but more of a different take on black metal with less of a progressive vibe and more bleak. The tracks are a little shorter than tracks that Fen usually puts together (8-9-minute average) but two (“Wayfarer Eternal” and “Sorrowborn”) both exceed 10 minutes. If Fen wasn’t a possibility for comparison, I would say Saor or maybe some Tolkien inspired acts and of course the mighty Agalloch would all be favorable. The layers of vocals, synth, guitar and percussion all blend into one wall of sonic desolation but not overtly aggressive, rather almost soothingly so. While there are blast beats and more up-tempo parts, the slower passages are as powerful (maybe even more so) and the entire album has a very organic feel. The vocal harmonies have a choral quality to them much like the latest Byrdi album where they sound gigantic and adds to the allure, most notably for me in “In Death, Valiant” with the acoustic guitar towards the end of the track. From a song writing perspective, the guitar riffing is relatively minimalistic and has some “old school” vibe to it, setting a base for the vocals and synth to ride on and actually having a real percussionist can’t be overlooked. The human touch is definitely noticeable with Havenless adding subtle changes and fills, further making the connection to this easier. The Watcher keeps within a few steps of center with the guitar, synth and vox which definitely gives a signature to the entire perspective of “Oathbearer”…….nothing I would say too experimental but more of a focused intent on keeping to a certain feel and not overdoing it. I have listened to the album a few times now and it keeps me wanting to start it over again and again and not just for a single track. I feel the whole album needs to be listened straight thru to get the message. I guess this is a black metal project but labelling it as such probably diminishes what it is and may “scare” some folks from it who would get into it for its atmosphere. The whole mix has a smokiness to it and a veiled presentation, almost just out of hands reach with tons of properly used reverb and acoustic touches…..a forest/mountain landscape feel. Definitely an album to check out for sure if you are a Fen fan and for those of you into projects like the latest Duskmourn and Emyn Muil or some of the killer heathen folk releases from this year, I think you will dig it too. Who am I kidding? This is a great album I think anyone could get into…