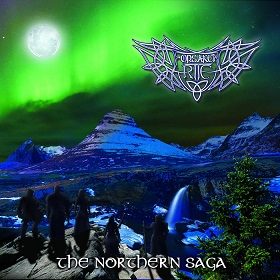 2015 saw the debut EP from Canada’s Forsaken Rite entitled “For The Honour Of Our Fathers” and now a follow up and first full length has been issued entitled “The Northern Saga”. The EP was very promising as far as direction, track style and performance and the full length is equally as strong. Featuring 11 tracks totaling over an hour, “The Northern Saga” does have a carryover track (“Wolves”) from the EP and mandatory epic intro (“The Departure”) so 9 new tracks if you have done your math. I think my initial comparisons to Helsott, Winterhymn and Aether Realm are still valid, with the inclusion of what sounds to be accordion (perhaps keyboard plug in?) acts like Varang Nord also could be comparable. Track lengths are in the 4-7 minute category which is where they should be for their overall vibe. There is some different things on display here from Forsaken Rite with some dirgier tracks (“Samhainn”) semi-piatey tracks (“To Forgotten Shores”) humppa-esque (“The Mead Horn”) swampy (“Murig ‘Uzgir”) and what I feel is their core sound…..symphonic folk/death metal. Although the diversity is nice, it makes it hard to figure out on some level who Forsaken Rite is. Hey, it’s a debut so now is the time to do a little bit of everything and see what feels right. I appreciate the fact that they are willing to try and are adept at doing just about anything. I think the last 3 tracks are the most successful (“Lament For The Fallen” “Wolves” and “The Hero’s Path”) as are a few of the earlier tracks as they have a synergy and most fit the epic style I think could be their eventual direction or at least what may be perceived as their sound. This is definitely a solid debut for sure. Strong performances across the board and some good ideas from a song/style perspective even if they are not as focused as they could be. The overall mix and production do seem to have a little bit of a fogginess to it which hurts the album as not being as razor sharp as it could be…..drums are very timid and the overall attack of the instrumentation is subdued. Even with some missteps, “The Northern Saga” is definitely worth checking out as it has some solid songs, strong performances and catchy tracks. Another epic album from north of the border.