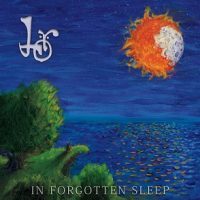 I always try to give my home state acts (Pennsylvania) a little bit more attention especially if they are awesome like Duskmourn (album of the year contender right now), Dreadeth, Appalachian Winter, Frost Giant, Turncloak and Wotanorden amongst others. Included on the list now is Philadelphia’s Lör with their debut album entitled “In Forgotten Sleep”. Having been in existence for 8 years or so with a couple of demos to their credit, they have finally put it all out there in the 10 tracks that make up the album, totaling over 68 minutes. Let’s pretend folk metal wasn’t a thing (perish the thought), I would immediately classify Lör as a progressive/semi power metal band and they have what I would consider a very “retro” sound. How about a blend of ELO, Rush, Rainbow, NJ’s Hades (80’s thrash band), Aether Realm, Eikthyrnir and Wilderun? Yes, that rules and that is a pretty good idea of where Lör is music wise. While not that folky overall, there are just enough folkier sections with the acoustic guitar and keyboards to give you a folk metal vibe. If the word “diversity” doesn’t come to mind while listening then I don’t know what you are hearing. There are numerous track lengths (just over a minute to over 12) and they delve in and out of various styles, tempos and genres which makes each track an adventure and extremely interesting to listen to, no matter what your metal proclivities are. While I would normally say I am not a fan of bands jumping around from style to style, it definitely works for Lör as there does seems to be a commonality to the tracks somehow or another. Why hide the long tracks in the middle when you can open with the 11-minute epic “Dusk”? With a sleepy start, it then punches you in the gut and gets heavier with each passing minute. I swear this sounds like an album that could have been released in 1986 and no one ever heard until now and would have killed back then as it does now. There are tracks that are more straightforward (“Dark Cloud” for an example) but most have a bit of quirkiness with loads of musicianship…….maybe a Goblin Hovel/Dream Theater comparison is warranted too? There is a little bit for everyone on here and even songs that you may not initially get into you will after a few listens as part of the tapestry woven here by Lör. Vocals are nice and diverse as well with death and power metal vocals switching back and forth and layers of backing ones as well. Tons of acoustic guitar and key parts along with the normal guitar, bass ( yes even some slap and pop bass parts) and drums. A little bit of a homemade sound to the whole album but it works as if overproduced I think some of the magic would be lost and make it sound stuffy. What a surprise from the city of brotherly love….. instantly on my debut albums of the year.