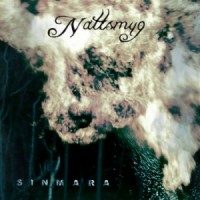 There are literally hundreds of bands out there with multiple albums that you have probably never heard of. Why is that? Lack of PR or a label or just being OK to not be in the spotlight? Well whatever the case is, Sweden’s Nattsmyg is now on your radar and with good reason. Their 5th full length has just been released entitled “Sinmara”. Yes, I said 5th full length (4 plus a redone version of the 2007 debut album “När Solen Slocknar” released at the same time as “Sinmara”). They have been in existence for over 10 years now and play a blend of black metal with some swampy tinges to their sound. My closest comparative act would be Bergsvriden on some level mixed with some classic Emperor…….a delightful mix for sure. Nattsmyg is primarily a solo project with Dan Heikenberg handling all vocals and instrumentation with female vocalist Linn Carlshaf who has appeared on previous releases. While previous releases have primarily been sung in Swedish with an English track here and there, “Sinmara” is primarily in English in both song titles and lyrics which is nice to see and hear. Does it change the overall vibe? Not really as the tracks still have the same impact in both languages unlike some artists who lose something when going to English as it doesn’t come across as comfortable as their native language. There are actually 22 total tracks on here over an hour and twenty minutes…..no this is not a double album per se but features two different versions of the most of the tracks from “Sinmara” getting a Trinitite remix (lone exceptions are album closer “När Röken Skingrar Sig” and a “hidden track”) Both versions of the tracks have something to offer with the original versions having a little more murkiness feel to them and the remixed versions being a little more aggressive. Choose which you like better as both sound killer. While I wouldn’t necessarily classify this as swamp folk metal like Svartby or Trollgasm, Nattsmyg has enough of the boggy sound to cross over while primarily being an accessible black metal project that deserves some more attention. A great release from Nattsmyg.