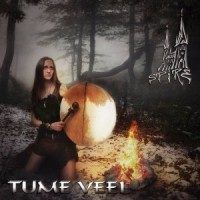 Mittelalter rock, that’s the tag which fits Spire and I would think they would be honored. This genre, Medieval rock, is ‘big’ in Germany. Bands like Schandmaul, Subway to Sally, Saltatio Mortis and In Extremo have lots of fans in Germany. It seems In Extremo inspires musicians outside Germany the most, we have Folkstone in Italy for instance, but they obviously have fans in Russia as well. Spire is a side-project of some Russian musicians. They have released an EP ‘Schattentanz’ in 2015, now they’re back with a full length ‘Tume Veel’.
When they start with ‘Ai vis lo lop’ it’s obvious the’re big fans of In Extremo, and with the next song ‘Reitertanz’ they make their point they love the German language as well. I’ve seldom heard a Russian band singing German fluently, and this is the case with Spire as well. They make up for this in songs like ‘Tume Veel’ sung in Russian (I believe because I can’t understand a word). Although all the tracks are fine, I like it when they put their own historical background in the spotlights.
Music-wise their sound is a bit more ‘electronical’ then we’re used to with these kind of bands. Where you can hear the bagpipes all over the place in bands like In Extremo and Subway to Sally, Spire melodies are of the same kind, but the sound is less authentic, the synths form the main part of their sound. I’m missing the thrill across my spine a bit with this sound.
The term full length is another issue, with less then half an hour of music, you can hardly speak of a full length. The music is nice enough to listen to a little bit longer.
With Spire the Mittelalter rock scene has gained a very nice band. With great songs and a nice sound, I’m convinced they will rock the Russian scene. I hope we will hear more from them in the future, because they started of with a very nice debut!