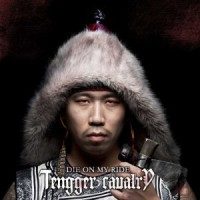 The Tengger Cavalry star has risen fast over the past year, after numerous releases over the past years (with an average of more than one full length each year), they are in for some expansion. I like the band a lot, with their Mongolian folk, they added another chapter to the Folk-metal history, together with Nine Treasures. The Mongolian instruments and the throat singing give another dimension to the folk-metal landscape. But I have to admit, they release so many stuff, I’m often thinking: ‘Again?’. I had mixed feelings about this new album ‘Die on my Ride’, taking the music in another dimension, could be nice, but entering new territory is a risk as well.
So, into the player with this CD. After the nice intro ‘Snow’, the albums really begins, nice Tengger Cavalry intro of the title-track ‘Die on my ride’, but when the singing starts I’m not that pleased, it’s a change but it doesn’t fit my idea of the band. The psychedelic sound in some pieces is rather nice idea, although I liked their original sound better.
Unfortunately this album goes on like this. The vocals are changed in an attempt to hit the charts, make the music more accessible, but it doesn’t work for me. With as an ultimate low ‘Ashley’, a love-song with vocals, which seem to be pulled through a voice-changing machine.
The best track in my opinion is ‘The Choice of My Mind’, but this song doesn’t sound very folk-metal, more a pop-song.

Well, I praise Tengger Cavalry, it takes a lot of courage to create an album with such a different sound. But in my opinion the mission has failed and I like all their other albums better.