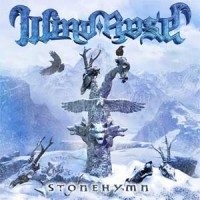 Do you like Elvenking. Fairyland, Alestorm, Wuthering Heights? Then you are guaranteed to like Wind Rose. These brave Italian warriors mix folk and power metal in a very entertaining way. Third album Stonehymn sometimes borders on the happy side of metal. If you can stand that, here is a fine piece of music for you.
You know when five skilled musicians perform well structured songs, magic may happen. Especially when the production is equally good. Possibly you will have to hear the album a few times before really appreciating it. By that time the tunes stick in your head. The songs are not simple, far from it actually. Yet after a while you recognize more and more little things to enjoy. A change of speed, a chorus, a lyric that may speak to you. Don’t listen to the record too often, then the magic could fade away some. So, a few times, yes, but not twenty times in a row.
Singer Francesco Cavallieri has been involved with Fairyland. A very powerful and versatile frontman. Clean singing, mind you. The first lines of ‘Dance of Fire’ he reminds of Jari from Wintersun. Folk instruments are being played through the keyboards. No problem, since the band does not present itself as a full out folk metal band. In fact, besides folk and power metal, there is a bit of progressive, Viking, battle and pirate metal involved as well. With all these ingredients Wind Rose create a definite sound of their own. The slight downside of this, is that the style is pretty much the same throughout the entire album. There is not a bad song on the album, but it’s hard to name one special song as well.
That’s splitting hairs, though. Stonehymn is a seriously enjoyable piece of work. Listen for your self. Just remember: a few times at first.