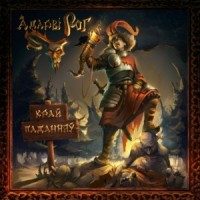 If you only listened to the first track off the debut album from Belarus’ Adarvirog and stopped listening, I could understand on some level. It seems to be very similar to a lot of bands out there style wise. However, you are missing out on a quality release with the rest of the album, filled with twists and turns the whole way thru. Entitled “Kraj Padanniaü” (my translation is “Land of Tales”), the album features 13 tracks (including intro and another instrumental) and has all of the tracks they have seemingly released to date, including first singles “Харэя” and “1863”. While Belarus has a tradition of some awesome metal acts they really haven’t exported a lot of folk metal with some exceptions in the releases of acts like Omut, Hok-key, and one of my favorites in Vojstrau (formerly Wartha). This is probably the folkiest all around release I have heard from a Belarusian act and offers some other nice surprises. First of all, Adarvirog has 7 members and without knowing what each does you have to figure you have a dedicated full time folk instrumentalist. Actually (first surprise) they have two with Valeriy switching between Bouzouki, Mandolin or Lira (lyre) and Vik tackling Duda (bagpipe) Lira and Bayan (accordion) duties. So tons of folk instrumentation with a pretty heavy metal sound of guitar, bass, drums and vocals.
I was reminded a little of Winterhymn but less “Viking” or Gjeldrune with a similar energy to their tracks but they have a very distinct sound and I would say are more progressive metal based then a first listen may reveal. The tracks are similar and yet all different from each as some have tons of stops and breaks or be heavier with less folk instrument or be more folky altogether. The overall sound quality is clean and discernible with vocals being nice and up front (in Belarus I am assuming) with nice guitar tone and a natural quality to the folk instruments. Bass and drums are present and hold down their spots keeping the bottom end rhythm tight and right.
A lot of little surprises makes more a pretty solid debut and a well-rounded start for Adarvirog.