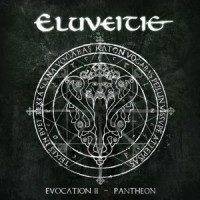 We have to go three years back, to Eluveitie’s previous album and it’s about 8 years ago when the Swiss folk-metalband released their acoustic album ‘Evocation I: The Arcane Dominion’. A lot has happened in the past years and Chrigel is only one left from the original line-up of the band. Half of the band joined Chrigel, last year. And before that this new acoustic album ‘Evocation II – Pantheon’ was already announced. After the split-up we could only wait and be curious what would come out of it. Would Eluveitie remain the Eluveitie as we know it, or would new paths be explored?
Now this new album is about to be released, we get our answer. For the fans of Eluveitie’s music, don not fear any longer. Eluveitie is still Eluveitie, the band can maintain their position as the number one folk-metalband in my opinion. Where can you find such a nice blend between Celtic folk and metal, sure there are more bands, but I think Eluveitie was the one who paved the paths for this blend in the way they make this music.
I hope they will make great plugged albums as well in the future, but they show in this acoustic album the music is still alive. This may be an acoustic album, but in a song as ‘Catvrix’, the metal-spirit is there for sure. I knit my brows sometimes when I listened to this album at first. Melodies like we know from ‘Scarborough fair’ for instance, weren’t something I expected from Eluveitie, but like we’re used to, these themes are used, but they’re just a small part of the song. A whole new song is composed around it.
The songs are well put together and performed by great musicians, the only thing I miss a bit in some tracks is the soul. The music is there, the musicians are there, but are they a tight pack… are they Eluveitie… When you listen to a track like ‘Ogmios’, I miss some soul. It probably takes a bit more time to get the ‘band-feeling’. I hope they can expand this experience and become the great band we used to know again. Because Eluveitie should never die, and when I listen to this new acoustic album, I believe everything is there to be the nices folk-metalband to listen again.