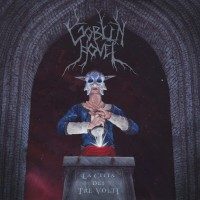 As I had predicted (and was spot on) that 2017 was going to be big in acoustic/heathen folk metal and some of my fav releases are all acoustic based this year including Runahild, Wolcensmen and Byrdi. With the pending Baldrs Draumar acoustic album looming on the horizon, NY’s Goblin Hovel beat them to the punch with the just released “La Citta Dei Tre Colti” (“City OF Three Faces”). Prolific is an understatement when describing GH with too many releases in their 7-year existence. While previous releases all had something to offer, last year’s instant classic “Revered Revenant Of Irreverence” cracked my top 15 for the year and rightly so. With a solidified lineup, the tracks were tight and crushing while being true their acoustic roots.
Now the follow up has arrived with 9 new tracks (well 10 actually….listen to it) totaling over 43 minutes and takes the Goblins on a different, darker path this time around. While “Revered…..” had some darker tracks, I thought the overall feeling was more of new discovery. “La Citta…..” has a just out of vision feel to it, lurking in shadows, hiding behind trees and dare I say, more Gobliny. Maybe the employment of the heavier and screechy vocal styles in more of the tracks is one reason but the drone of the tracks has a doomier feel all around for me which is way OK. Even tracks like “Borokol” which is more up-tempo are scary and trip between the insane and the phantasmagorical. Being totally acoustic based, Goblin Hovel tend to be a lot heavier than most stuff out there just due to the purity of the sound. No hiding behind a wall of electronic gadgets……just unobstructed annihilation. Comparable acts? Hard to say really…….I can’t really say a metal band that comes to mind other than maybe a little Trollfest or Bergsvriden for some reason just for the audacity. Maybe some acoustic or blues band would be better but none I could really give as examples. A one-of-a-kind for sure. I listened to the album a number of different ways and found the headphones to be the best way, little nuances throughout may be missed unless you are cranking it, subtle percussion accents and instrumentation add a little texture.
If you like heathen folk or even if you are into more extreme stuff, I think “La Citta….” has something to offer everyone without ever straying away from what they are, which is pretty incredible if you think about it. Another great album from Goblin Hovel and a contender for a top album of the year for the 2nd straight year……