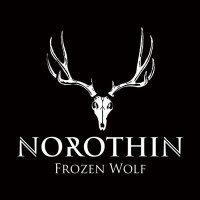 Norothin is a 6 piece from Spain but not in the “traditional” sense of what you may think a band of 6 members comprises….unless you think Heidevolk. Yes, you guess it…..two vocalists along with bass, drums and dual guitars. They have just issued their debut album/EP (you can decide which) entitled “Frozen Wolf” independently via their Facebook and Bandcamp pages.
Norothin will definitely have some easy to compare to acts such as the aforementioned Heidevolk (to an extent), early Helsott, Mithotyn and Amon Amarth. I guess pagan/Viking metal is where I would put them categorically as the tracks have that vibe to them with lyrics primarily about war, middle earth and drinking….all good stuff. So, with dual vocals of Setyr The Wild and Eskundalf you would hope for that Heidevolk combined vocals style which does make some appearances here (most memorably on “The Final Storm”) but it seems they trade off vocals from a screechy style to a guttural style….not sure who does which. They both are relatively successful which could lead you to think “Why have two then?”. Hopefully they will do something more interesting with both vocals on a future release…maybe more trading off and harmonizing as a thought? The tracks average about 6 minutes in length with album opener “The Third War Part 1” being the longest at 8 ½ minutes or so. I could even hear a power metal comparison on some level with the actually music with the twin guitar harmonies, galloping riffs and steady drum and bass. There is nothing super adventurous on here which is both good and bad. What makes it good is that you have heard this style of tracks before and will get into them for sure. What makes it bad is that you have heard this style of tracks before and you may opt to listen to something else. I think they may lack a little bit of an identity for now but that can change over time as I think the overall quality of what they do is well worth a listen. So go give Norothin a spin or two and enjoy what they do….even if you have heard something similar before. Decent release.