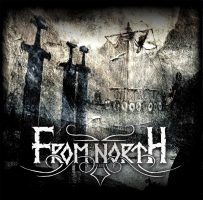 Sweden has certainly churned out a lot of great music this year with albums by Utmarken, Vintersorg, and Apocalypse Orchestra being in heavy rotation for me (and I’m sure others as well). Time to add to your killer Swedish releases from 2017 with the debut of From North out on Downfall Records.
The self-titled offering has 11 tracks and are presumably tracks not released previously as I do not believe they have any initial releases before this. Look, I am sure by band name and album cover and song titles alone you will get a pre-conceived idea of what From North is all about……melodic death Viking metal in the vein of Amon Amarth and you couldn’t be further from the truth. While they are certainly melodic and are Viking metal, they are not in the death metal vein but have a more traditional metal sound about them. I wouldn’t call them power metal either but you could get a little of the Ensiferum, Manowar or Hammerfall vibe from them on a first listen. After a few listens, you will start to hear the little things that would have From North create their own little niche in the metal world.
While they are a 5 piece (vox, dual guitar, bass and drums) they also use programming and instruments such as violin and what I perceive as whistle throughout the various tracks to give a little touch of folksiness. I was impressed by the fact they didn’t try to overdo it and keep it relatively simple from a song structure and style point of view. I actually think even further stripped-down tracks like “The Sacred Oath” or “The Longest Wait” are the most successful reminding me of the closest comparison I could give you in Einherjer, Manegarm or “Nordland” era Bathory. I still don’t think they are necessarily that close but that’s as close as I could get. The tracks are catchy and they are pretty recognizable after a listen or two as From North which is definitely good…..in a sea of Viking metal bands, they will be able to withstand the maelstrom with their off the beaten path sound.
The production and mix are solid with the vocals rising above the layers of guitar, bass, drums and programmed instruments. Powerful and understated, From North just get straight to the point and bypass the metal traps so many acts before them have fallen prey to.
Great debut album.