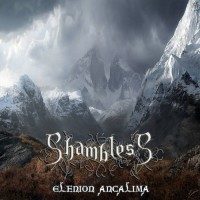 One man projects often fail because this one man doesn’t master all the instruments. Or he does, but doesn’t know how to write a proper song. Or he knows how to write one song properly and then endlessly copies himself. And once in a while, a one man project works and delivers. Shambless is this exception. A Bulgarian multi-instrumentalist who knows how to make interesting music. It’s been a while since I have been blown away by a band / artist that I didn’t know before. Somehow Shambless has been under my radar, despite being around for 20 years and releasing 4 full albums already. This three song EP delivers big time.
Volume on 10, speed on 11, growling and snarling vocals, lots and lots of melodies, Shambless has found its place on the melodic and symphonic side of black metal. For fans of Summoning, Dimmu Borgir and the voices of Dutch bands Onheil and Misanthropia, you can’t possibly go wrong with this EP. Only three songs, but what an effing powerful 18 minutes. The melodies are bound to stick in your head. First song ‘I Ardhon Ban Lacha’ made me smile and headbang at the same time. Smile because I
knew instantly that I was gonna like this very much. And headbang because it’s catchy in a heavy sort of way. It’s not all full speed ahead. Shambless knows that less speed is sometimes more interesting. Second song ‘I Aear Can Ven Na Mar’ is more of the same. That’s not a bad thing. It’s another fantasy inspired Lord of the Rings sort of metal. A raw sort of Fairyland, if you like.
Closing song ‘Bain A Goeol’ is a somewhat different story. This is much more melancholic, or even atmospheric. Where is the folk in all this, you may wonder. Well, it’s all in the melodies and in the feel of the music. If the doctor tells you to stay away from keyboards, don’t start listening to this EP. For the remaining 99,9 %: open your ears, minds and hearts for a truly skilled, entertaining and gripping piece of music. From what I understand the band does perform live, despite being basically a one man band. So with a bit of crowdfunding we might enjoy this in our own backyard. Just give me the bank account number, because I am a fan.