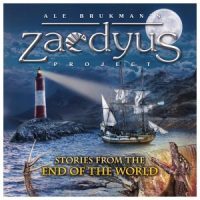 How often do we have the chance of listening to folk metal from South America? Not often. Sepultura are well known for their tribal influences of course, yet still are basically a thrash metal band. Angra make progressive power metal. So a band from Argentina claiming to play progressive folk metal is worth checking out.

Another USP is that the vocals are mainly female. It’s a bit unclear whether this is a real band or a project. The full name of the band is Ale Burkman’s Zaeduys Project. Ale Burkman being the drummer of the band / project. No matter. He has assembled capable musicians to make an album which consists of power / folk metal. Sort of like Elvenking, but with female vocals. Even Ancient Bards spring to mind. The folky feel mostly comes from the violin. Other than that the melodies aren’t overly folky. Especially when the throttle goes down the power metal elements prevail. The band describes its own music as progressive metal with Argentinean folk instruments. I don’t fully agree, as you might have guessed by now.

Where the comparison with a band like Ancient Bards fails is in the overall quality. More specific in the song writing, though cathy as hell. But just not thoroughly memorable. And it fails in the female vocals. Singer Marcela Lopez Rotela simply lacks a bit of presence and more importantly pure power. Listen to ‘Chasing the dreams’ and you may agree with me that it sounds a bit tired. And that’s not a good thing for a first full album. ‘The promise of Neverland’ on the other hand brings joy in our hearts. Great melodies, variation in speed, we like!

Overall a promising album and an interesting band. If the singer somewhere can find a bit more power there is no reason for the band not to improve. And then, who knows, the next album will get even more turns and airplay. More than that, Zaeduys could do with a more clear direction. If you claim to be a progressive metal with Argentinean folk instruments, play that kind of music. And if you want to play some other style, fine, do that. Now the band is a bit like a football player who is rather good at everything, but is not the best at anything, Which is why he doesn’t get much time on the field. Does that make any sense? The ingredients are all there, just mix the good elements in an interesting way and we’ll be monitoring this little gem from the South American continent for years to come.