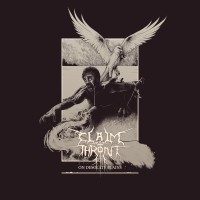 Hailing from Australia, where metal scene is developing consistently, Claim the Throne comes up with a rather solid material. With their keyboard-heavy style, they kind of reminds me of Enshine a little (Enshine’s “Origin” album to be precise).
The album is quite cohesive. There are no elements such as filler songs to make it incohesive, which is pretty good for my taste. The guitars are your average melodic death metal guitars. Tremolo pickings and riffs that are covered up with heavy characteristics are in abundance as can be expected from a Melodic Death/Folk Metal band. The guitars definitely don’t go against the grain. The drums are recorded well, the keyboards are decent as they were in the previous release “Forged in Flame”. Literally everything is all right on the album except for the female vocals that are not accompanying the main vocals. It was the only element that I didn’t like personally, even though it was not often at all. It might be seen at the one minute mark of “My Dying Throes”. Again, the female vocals are decent when they’re accompanying main vocals. For example, at the one and a half minute mark of “Harbinger, Scavenger” accompanying female vocals are simply awesome and add to the atmosphere.
I really liked the piano parts that are topping the background. A good example can be seen in the beginning of “Where Night Passed and Sunlight Shone”. I’d like to name this album as a massive step forward together with “Forged in Flame” album, both being revolutionary in the band’s history.