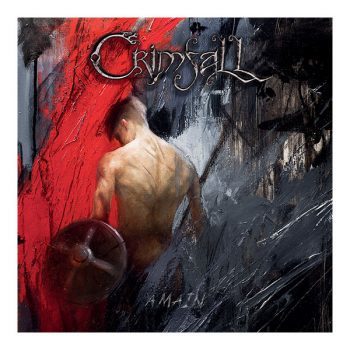 I’m sure many of you (myself included) had thought that Finland’s Crimfall had called it a day after no new music for the better part of 6 years. The last full length (“The Writ Of Swords” from 2011) showed them honing their unique blend of symphonic metal with touches of folk and Viking metal.
Coming out of hibernation seemingly on a new label (Metal Blade) Crimfall has ushered forth their 3rd full length with “Amain”. The new album features a total of 10 tracks totaling almost 47 minutes…..9 tracks plus intro to be exact. If you had never heard them before I think there are some obvious comparisons to go to for some of what they do……countrymates Ensiferum, Wintersun and Moonsorrow I think are pretty apparent as are the stylings of Italy’s Rhapsody Of Fire. So, if you put those acts together you can definitely get the symphonic, folk, battle metal vibe emanating from Crimfall without even listening. There is a nice diversity in styles with the symphonic metal style hear with “Soundtrack” being a word or theme I kept going back to. The sound effects and interlude passages, spoken word parts and moody sections that aren’t necessarily as much a “song” as they are musical sections tying together the other parts give this a very cohesive feel. The highlight for me are definitely tracks 3 thru 6 where you have a mini concept album with “Ten Winters Apart” with sub titles to each. Luckily, they are loosely tied together and don’t necessarily require you to listen front to back but complement each other nicely when you do. The dual vocal tandem of Mikko and Helena are also a different twist on things with male/female tradeoffs and harmonizing throughout working successfully with each passing track. Whether or not this is folky enough for some of you could be debatable but I think there is enough epicness to it to make you forget asking where the fiddle or the whistles are. The mix and mastering are full and powerful with big sounding guitars, bass and drums along with layers of programming and vocals give this an even grander appeal.
Crimfall have returned in a big way with an album full of solid material and triumphant musicianship. Welcome back.