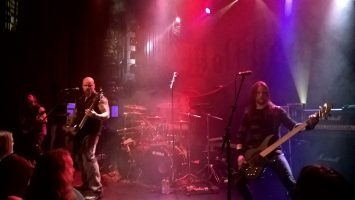 With a somewhat small tour though Europe, Ensiferum present their new album Two Paths. My colleague Jeff is right in stating that this album will bring the band new fans, where some of the old fans might struggle to like the increase in clean singing and overall accessibility. Why not check out what it sounds like live?

Wolfheart
First support act are Finnish Wolfheart. Basically melodic death metal, with a bit of pagan and even doomy parts on the side. For this early hour there is a reasonable crowd. When the balcony is open, 700 people can attend. But the balcony is closed and stays closed the entire evening. Time to admit that even one of the biggest bands in the pagan folk metal scene do not attract huge crowds in Holland. But back to Wolfheart now. The band suffered from a few technical difficulties. The vocals and one of the guitars were gone now and again. Nevertheless a decent performance. Last song Routa brought a nice atmosphere which the crowd appreciated.
Rating: 7/10

Skyclad
One of the most important bands in the folk metal scene. British Skyclad is one of the founders and stick to what they’re good at. And that’s making folk metal with the emphasis on folk rather than metal. I’m not entirely sure the package of bands works as a whole. First you’ve got a melodic death metal band. Then a folk metal band and finally a pagan metal band. The genres aren’t worlds apart, but they do attract different crowds. I would think Skyclad would be top of the bill at Castle Fest every year. But on this tour they are by far the least aggressive troop. Clean singing, old people (I can say this, I am 52 years old), acoustic guitar. Only when The parliament of fools is played does the crowd react in the form of a moshpit. I can’t help thinking that it’s started to fight the boredom. In the end there are smiles all around, so maybe I am being too critical.
Rating: 6/10

Ensiferum
Clearly the band that everybody has been waiting for. Throughout the set there is a lot of emphasis on the new album. The band is not afraid to show what Ensiferum stands for in 2017. And that’s proper metal, fast, loud, yet less aggressive (or true if you will) compared to a decade ago. Not necessarily a bad thing. Bands should evolve, albeit for the right reasons. Starters For those about to fight for metal and Two paths set the mood. The mood being festive. Ensiferum is more and more becoming a party metal band. Accordionist Netta Skog is a welcome addition to the band and adds a nice picture to the show. Way of the warrior in my opinion is the most clear example of the current Ensiferum. Fast, headbangable, accessible chorus, guaranteed to start a moshpit. I like. Still, oldies like From afar are greeted with the biggest cheer. After an hour and a half the party is over. Is there still room for one day festivals like Paganfest? Judging by the number of people tonight, I think I have to travel to Germany more and more.
Rating: 8/10