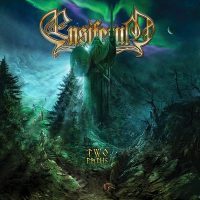 Name the top 5 biggest names in folk metal and Ensiferum would be on the list I would think. After releasing nothing but killer stuff from day one, I would say their previous effort (“One Man Army”) for new label Metal Blade in 2015 was somewhat lacking. Decent? Of course, but for me just not as crushing or catchy as earlier releases. So, what does the brand-new album “Two Paths” bring? A return to form in a big way with epic track after epic track. However, it will certainly rankle many a tailfeather with some different sounds coming from the Ensiferum tribe. You will still have the epic battle folk metal style with first single “For Those About To Fight For Metal” and a few others that have the signature Ensiferum sound. I would say as the album progresses you start to hear the different things going on, most notably the multiple vocal styles (mostly clean) being used which may throw a lot of people off. I think it’s refreshing to try some new things while still having the connection to the more notable style…..and I can give you a perfect example. Remember the last Manegarm album? Yes, the 2015 album of the year for us here was very similar in terms of fusing the known sound with some newer sounds mixed in. One things is for sure….Netta Skog has more than adequately filled the shoes of Emmi with her accordion stylings. She adds tons of energy not only musically but also vocally throughout the album but most notably on “Feast Of Valkyries” where she is the primary vocalist. The 13 tracks range from just over 2 minutes to just over 5 minutes so no change in track lengths and keeping them relatively short is good. I can only assume that Sami (Hinkka-bassist) is the one doing a majority of the clean vocals in tracks like “Two Paths” and “Don’t You Say” and I think he does a commendable job as he has always done as a backing vocalist. I thought to myself “This album is really great but doesn’t really sound like Ensiferum” and I think that will be what a lot of people will think. Many may disregard it as well and that would be disappointing. While I wouldn’t necessarily call this a “classic” I think it is better than the last album for me and deserves a fair shake with everyone giving it a few listens before deciding what they think. There are two instrumentals (intro “Ajattomasta Unesta” and “Unettomaan Aikaan”) and alternate versions of “Don’t You Say” and “God Is Dead”. I also prefer the overall mix and production of this album with a fuller more natural sound to “One Man Army”.
I would call this probably the most “controversial” album to come out in folk metal this year but to me it is a non-issue. If anyone else had put this out you would be all over it. Having the Ensiferum name on it will lead to some discussion as to what it’s all about and I can answer that pretty clearly…… ”Two Paths” is a solid album and a nice return for Finland’s native sons.